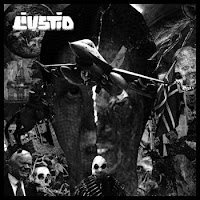 Livstid come from Bergen, Norway and this is their eponymous cd released in autumn '11. They formed in 2006 and so far they released a split 7" w Passiv Dödshjälp (2006,Halvfabrikat Records,Anarkopunx Records) a spit w Human Error (2010 on a bunch of labels), the Kriminell mp3 release on Moshpit Tragedy and appeared in Extreme Obscene '09. The eponymous cd is not a demo but an official release on Fysisk Format, Lukket Avdeling and Nakkeskudd Plater and delivers 14 tracks and nearly 30 minutes of a raging mixture of crusty flavored hardcore with Swedish death metal (and even old school grindcore) and D-beat. This is brutal as hell: Vocals are rough screams/yells, songs are fast and short, the double guitar attack brings fast riff works and the whole thing reminds of Radioskugga, Passiv Dödshjälp, Fredag Den 13e and such extreme D-beat influenced acts, imagine Bombstrike adding some metallic leading guitar parts in their aggressive crust and you got Livstid. You can listen the cd in band's bandcamp or get it here. Dnld link is provided by the band (thanks Kikken and Cheers!)