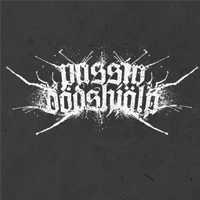 Passiv Dodshjalp is a five piece act and come from Gävle,capital city of Gävleborg County, Sweden. They formed in 2007 and this is their eight track cdr recorded and released in spring of 2008 by Halvfabrikat Records, the band also released a split 7" with Livstid from Norway and is going to release a 12" mlp called Häng dom.
The cdr lasts for 17:30" and delivers some great tunes and the variety of riffs makes the whole thing really intreresting: Sometimes they sound like Skitsystem, sometimes they throw some hardcore riffs inside, sometimes they add some metallic hints and unexpectedly even some rock-n-roll riffs (check 'Helvetet tur och retur' s riff) but always staying in the crustcore-käng territory. the vocalist brings rough throatty vocals and the sound quality is good.
As conclusion:this is interesting demo and the variety of songs make it stand beyond the pit of bands that repeat the same and the same in a monolithic way,check more reviews here

Get it here
Posted by 7inchcrust