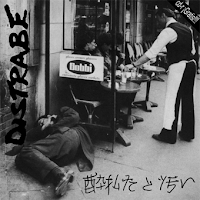 Distrabe come from Barcelona, Spain and Gratis!!! is their cdr which consists of eleven tracks of (with name and logo like these what you expect?) chaotic punk D-beat released in 2011. There is some information on their site but i can't understand much of it, he band formed in 2010, members weer involved with Mozas Necias, Mördare and others. Gratis!!! (Free) was released by the DIY label Killer Pandereta Records and delivers fast, raw and chaotic D-beat punk in sixteen minutes of endless feedback of noise with angry shouted vocals in Spanish, including covers of Crow, HHH, Destruccion and RIP. Link is provided by the band