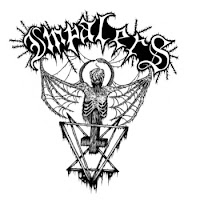 With a name like that and the drawing in the first picture you expect a raw and extreme black metal act but believe me, their only connection with black metal is the Venom hints that echo in their D-beat/Motorhead blending: The Impalers come from Austin, Texas, United States and is a duet formed by people of Mammoth Grinder, Deskonocidos, Criaturas and Hatred Surge, this is their five track demo recorded in 2010, in May '11 they released their ep on Todo Destruido. The demo came out in 100 green, red etc pro copies in tape format, it sold out and a second press came out on Nuclear Solution Records. The black metal drawing appears as tape cover too (check here, is this the second pressing?)Music wise brings nearly ten minutes of Motorhead-ish D-beat, songs are fast with catchy riffs and more or less move in the same speed with the exception of Return to Eden which is slower, some guitar solos pop up, the vocals are rough and as i said the whole thing smells Motorhead, Discharge, Venom and Dark Throne, good D-beat in drunk rock n roll mood.
Dnld link is blatantly stolen from Play it Loud blog