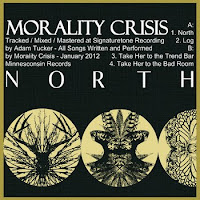 Morality Crisis come from Minneapolis/St. Paul, they formed in 2003 and broke up in 2006, i don't know much about them, Love and Passion ep was released in 2005, North is the offspring of their their comeback in 2011, recorded in January 2012 and not released as a physical release (not yet), but the tracks are available for downloading in bandcamp. The ep brings nearly fifteen minutes of hard hitting post screamo hardcore mixed with Sludge and metal with a plenty of breaks and beat changes in the songs and a blending of clear vocals with brutal growls or angry screams. Sleep, Crowbar,Converge and Karp are some of their influences (can i add Raein or Anomie here?), there are times that the riffs are emotional and heavy and then followed by faster parts and brutal outbreaks, not boring moments here, just high intense music all the time