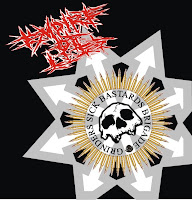 Grinders metal punks making noise: Empire of Lies come from Quetetano, Mexico and deliver brutal grindcore: They formed in 2007 and include people involved with local bands and the anarcho/vegetarian/animal right movement, there's a lot of information in their facebook page but babel fish can't give me any help. The demo was released in 2010 and bring four tracks and ten minutes of grinding noise. As expected this is heavy and brutal, A cover of A for Arrogance of Agathocles is included. Napalm Death, Brutal Truth, Regurgitate and other brutal acts are mentioned as their inspiration, the intro track is a mid paced introduction to the grinding mayhem which is fast and close to aforementioned bands, there are some slower parts followed by fast outbreaks of noise and metal guitar riffs. Brutal! The link is provided by the band.