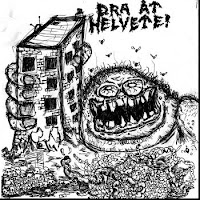 The spirit of Bombanfall rose from the grave and inspired there three punks to record this little piece of shit of four tracks of raging hardcore reminding Bombanfall (in both music and singing) in some raw recordings forgotten in a dark cellar. Four tracks, all fast, furious and primitive hardcore with a slight hint of Black metal with angry shouted vocals and raw guitar. This is short and fast but great enough to give a wasted listening especially if you are nostalgic to Bombanfall or early Extreme Noise Terror. Oh i almost forgot it: Their name is great! (even Vision of War named a song Dra Åt Helvete in Shit Parade)The demo is free for downloading in their bandcamp. Det här är inte bra Är det så här det ska va? Alla kan fan Dra åt Helvete!!! (dedicated to 199, Greek punks know what i mean)