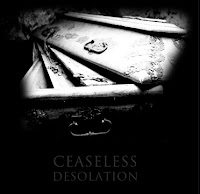 Polish crust punk scene has brought some great acts (Infekcja, Filth of Mankind, Sanctus Iuda, Lost, etc) and Ceaseless Desolation seem to be another worth to mention band of this scene: They formed in 2009 and this demo was recorded in March 2011, a cd version of it is released by Blindman Melodies in 100 copies. Here you got five tracks and nearly 19 minutes of crust aggression: Honestly, i was expecting something close to Nuclear Death Terror because of the name but similarities end in name and heaviness: Music wise there is a blending of crust and stenchcore with some black metal hints popping up and take off crust to the raw brutality of black metal (check Dwunożna Autodestrukcja or the ending part of Ucieczka), the the sound quality delivers the goods, the songs are lengthy and fast paced with a few slower doomy parts, vocals are rough in the usual crust way, lyrics are in Polish and deal with "nihilistic and depressive topics, and beside some personal issues, about individual freedoms and thoughts on the conditions of the contemporary society". This is heavy and hell, i wish only there was translation of lyrics in their ReverbNation (babelfish sucks!), you can order a copy from Blindman Melodies or listen and download the demo in their Reverbnation or just click the link below (thanks Mark and cheers!)

there will be lyrics in english soon... thank you for support. cheers!