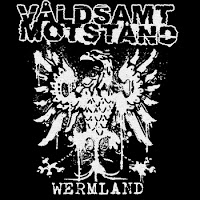 Våldsamt Motstånd hail from Karlstad, Sweden, the home city of Deathsters Vomitory and this is their third demo recorded and released in spring of '11 in cdr format. They were formed in 2010 and so far they released three cdr demos, Lagen om alltings jävlighet (2010), Högre tempo - djupare gravar (2011) and Wermland (2011). I don't know what they delivered in their first and second demo but with Wermland they bring seven tracks and nearly fourteen minutes of fast käng hardcore/crust reminding of Skitsystem and Bombstrike. All songs are fast minus Normal and Vagval's intro which reminds me of AC/DC (the intro,not the song!), the vocals are yelled with some growls here and there and music wise some (black) metal hints (check Vargad) pop up in the crust mayhem. You need some brutal shit? go ahead and get it!

These guys are sick. Hey would you mind putting my bands demo on here?

hi DarthVomit (great nickname btw) and thanks for the comment,i would be glad to post your band's demo, just send a mail at 7inchcrust(at)gmail(dot)com with a brief history and a download link where i could find it.cheers!