Crypt Of The Zombilord-Untitled cd/tape 2011 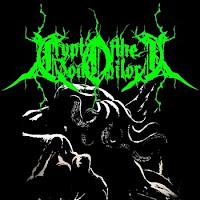 No don't get mislead by the name, this is neither goregrind not deathgrind but crusty grind-thrash heavily influenced by old school grindcore and even metal punk: Crypt Of The Zombilord come from Borås, Sweden, they formed in 2011 for the "love of older grindcore and punk/metal bands. It’s not that we wanted to be stuck in the past or glorify it but wanted to do something that had the organic energy and delivery of the bands we grew up with." If you want more details about them, there is an interesting interview in Pest zine, you can visit their facebook, twitter and their blog.
This eight track demo cdr was recorded in summer of 2011 and was released in January 2012, there is a limited to only 50 copies tape version of it (Sacrificial Tapes) . Music wise there are eight tracks "influenced by bands such as NAPALM DEATH, AMEBIX, DISCHARGE, REPULSION, DARKTHRONE and CARCASS": Genres come all in a blending of crust with grindcore and thrash, brutal growls and yelled/shouted vocals all combined in stinking liquid shit in a boiling cauldron in hell. Beats move from mid paced to fast, no blast beating wall of sound in here, sometimes they are more into grind and sound like Obituary (check The Lost Trailblazers) and sometimes they bring some metal crustie parts (Cultural hyphae). This is available from free in their bandcamp but if you want a real copy just contact with the band.
CoZ are included in PUNK AID: JAKARTA CALLING" via Movement Records (Indonesia) and Evacuate Records, their discography also includes a split tape/cdr with F.U.C.K.

get it here
Posted by 7inchcrust

Here is a link to download baltring terror(demo 8 trax), french d-beat.
it's second demo, there are krevar and bakounine members.
they released two demo and split tape with dispose (d beat noise from sweden)

Thanks for the review and link!

Hi there! cheers and beers!