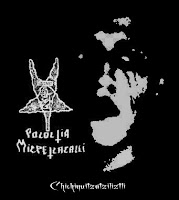 Pololtia Micpetlacalli is an one man experimental project from Peru: Alexander (cheers!), the guy who formed PM describes his project as Raw Metal - Noise - Folk and the truth is his music is as strange as the language his sings in: Pololtia Micpetlacalli means forgotten coffin in nahuatl which "is a group of related languages and dialects of the Nahuan (traditionally called "Aztecan") branch of the Uto-Aztecan language family. Collectively they are spoken by an estimated 1.5 million Nahua people, most of whom live in Central Mexico". Its very hard to classify the music, there are not any real instruments here (except percussion) but computer sounds: fast drumming keeps the beat for the extreme noises, there are atmospheric ambient-ish passages here and there or even ballad-like tracks, high pitched acid black metal vocals and lyrics about nature and death. Sometimes it sounds like raw black metal and sometimes goes beyond that. Some tracks are uploaded in Youtube so you can have an idea of what you should expect:here, here, here and there.