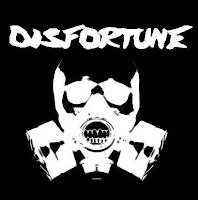 Raw D-beat from Bristol, UK: Disfortune is a quartet of crusties and D-beat Noisemarines is their first effort which comes in cdr format and delivers six pieces of raw and distorted D-beat with rough and distorted vocals. The song titles Victims of a Giftgasattack and Straightedge My Arse make things clear: Expect nothing less than endless feed back of noise, empty beer bottles on the ground and a drunk and raw D-beat attack in the vein of Disclose, Giftgassattack, Electric Funeral, Atrocious Madness etc, as they say "We started a band, we stole some riffs, we played like shit,We're alright I suppose, but we're no Giftgasattack", yes they are alright and they fuckin shred, i like this shit. The cdr lasts only seven minutes but this is enough to deafen your ears.

listen in in soundcloud or get it here
Posted by 7inchcrust