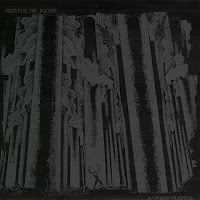 This is political anarchopunk from Latin America: A//narcolepsia hail from Venezueala, they started around 2007 and recorded a demo tape, in 2008 the spilt cd w Dissension came out inlc. live recording and its a Benefit release of the Committee of Victims Against Impunity, in 2009 they toured in Colombia and released a split lp w Siervos de Nadie. All releases are offered for free by the band. if you are into anarcho-punk then this is for you, this is fast, angry, raw, sometimes brutal and full of wrath female fronted anarchopunk in the tradition of South America anarcho-punk bands, if you speak Spanish check their site and Sala de Noticias Anarchopunk.

Thanks for the review! Nice to here you like it!
Here cabeza, drumer of a//narcolepsia.

hi Cabeza,thanks for the comment, hope to see more records from you coming out
Salud! :)