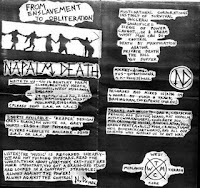 A text by Nik Bullen, bassist,vocalist and founding member of ND:
."The 'From Enslavement to Obliteration' demo is a demo recording by Justin,Harris and Nic which was recorded in one day (about 8 hours) at Flick 8-track studio in Birmingham...
The demo features tracks which were not recorded in any other form such as'Unclean' and 'Death By Manipulation', and also marks the debut of 'You Suffer' which was improvised in the studio during the session...
The demo does not have any relation to the album 'FETO'. The title is my idea and the band used it afterwards without asking me about it, as they did when they called an album 'Death By Manipulation'..

Nik wrote a few infos in 7inchcrust about the supposed Napalm Death-Punk is a rotting corpse demo, check these comments here
And as for the F.E.T.O name, Shane Embury and Mick Kenney(Anaal Nathrakh / Mistress / Exploder) set up the F.E.T.O. Records...
Tracklist:
01:Multinational corporations
02:instinct of survival
03:Unclean
04:Sacrificed
05:Siege of power
06:Caught in a dream
07:What man can do
08:Control
09:Death by manipulation
10:Abattoir
11:Private death
12:The kill
13:You suffer

thanks! this is a real treasure!i will post it here as soon as i have free time and in 7inchrust blog as well since there no much traffic here..
can you tell me a name or nickname to get the credits? now you are just an "Anonymous" :).
and hope you had great time in your holiday! :)
cheers

Glad you appreciated it! The holiday was great... a well deserved break for us away from the kidz'n'katz!! I wasn't looking for 'credit' but if you insist it's RK... I've got a few other gems I might rip for you at a later date... All the best and keep up the good work you've got 2 of the best blogs on the net!

ok, i posted it on 7inchcrust. thanks again :)

Hey thanks for this post, but is there any possibility you could upload it to some other host? ZShare's links don't seem to work anymore, the page just refreshes over and over... Thanks!!

link is active, you just have to skip the commercial shit that appears sometimes before the link page opens, ok?

i cant download from Zshare for weeks.rapidshare or any other please!

new link is on!

Anonymous said...
This comment has been removed by a blog administrator.
9 September 2009 at 15:26