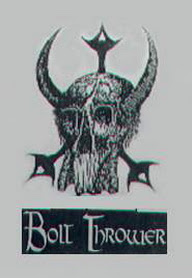 In their early days Bolt Thrower had crust and hardcore elements in their death metal and their first official record "In battle there is no law" had good critics and from crust community.
Concession of pain was the second Bolt Thrower demo and was recorded in September 1987 with BT as a four piece and not the five piece we all know. John Peel was enthusiastic about them and that led to a radio session and a record offer from Vinyl Solution
Tracks:
1:Concession of pain
2:Challenge of power
3:Forgotten existence
4:In battle there is no law
5:Psychological warfare

thanks
this is really good
jon

good to have this one!

hey can you repost this? Cheers

there you have it!
cheers

Aw man... you think you could ever get around to re-upping this one?

re uped it,enjoy it.