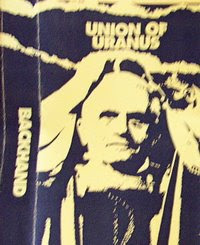 UoU were a crust band from Canada and this is their Backhand demo tape (1994, Daybreak Rec.s) and its better to read this text from their myspace than my shitty writing:
(Union of) Uranus were around in the early to mid 1990's and released a demo tape (called the "Backhand Demo", which was later to become their side of the elusive split lp with His Hero is Gone), a split ep (with Quebec crusty band Immoral Squad) and the double ep (which was later re-released as a 12'' on Farewell Records from Germany). Uranus' was more or less based in Ottawa, Ontario, Canada, and sort of self-perpetuated the DIY scene at the time, which was loosely organized around a venue/house known as 5 Arlington. Member(s ?) of Uranus lived at the house, which was the hub of activity in Ottawa through it's existence. Many touring bands were brought in, who otherwise might have taken the well-worn route from Toronto straight to Montreal and avoided the smaller city of Ottawa. With an insular scene such as Ottawa had at the time (largely due to the city being relatively small), and it's connection to Montreal, many bands such as Shotmaker, Uranus, Drift, One Eyed God Prophecy, et al. shared resources. Yannick's record label, the Great American Steak Religion, was also responsible for releasing many of these bands, and internationally, the home scene of these bands was probably seen as being larger than it actually was. These years in Ottawa were probably the most active for "crusty" type bands (although there was always an emo aspect to the bands and activities) which, with the demise of Uranus and 5 Arlington slowly vanished. Members of Uranus went to play in bands like Speedy Huffler Kings (drummer), Dead Man's Right Hand (singer), and of course His Hero Is Gone and Tragedy (Yannick).
Tracklist:
1: Backhand
2: One eye strengthens
3: Weight of tomorrow
4: Equilibrate
5: Preasure (Negative Approach)
Posted by 7inchcrust

shit....one of my favorite bands ever. they have also a discog cd out.
also, i have a dead man's right hand practice recording, and i can upload it if you want (:

ps. are you greek? because you seem to know a lot about 80s greek crust.

thanks..
ti silogi Whispers mporeis na ti vreis sto "Only in it for the music" blog

everything so far said...