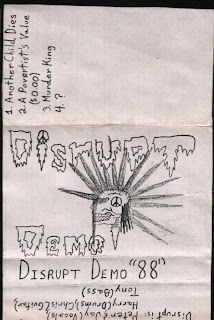 I have posted Disrupt's Millions die for money making boot ep here and there's a notice on the cover informing this is the first Disrupt demo recordings.(actually a part of first demo:the ep contains seven tracks while the regular demo tape twelve. Today i discovered Tony Leone's myspace page, he was the first Disrupt bassist for really sort time (a month or so), there's a 4 track demo there and and since he was the first bassist this must be the first demo, furthermore Tony says so in Profane Existence forum in a topic about this tape: This is the first Disrupt demo, these tracks are not included in the 'The Rest' cd or the discography cd (Dead Alive Rec.s), Tony had these tracks and gave it to Kamarinos after Relapse remastered all the tapes..
You know what they say:"when more than one greeks are involved then a mess comes",Pete Kamarinos and Harry Haralabatos...... (just like Tony, Harry left the band very early).. i really don't know what going on but i have no reason to doubt about what Tony is saying
Demo tape 88 tracks:
1: Another child dies
2: Porvertist's value
3: Murder king
4: untitled
Tony Leone's myspace
Posted by 7inchcrust

WHAT A RELIC! GREAT FIND.

The demo was never released it was recorded so Pete and Jay could get an idea for how their vocals should be. I have another version of this demo with Pete and Jay's vocals sounding closer to how they wanted but the music isn't as clear sounding. I also have the first and second rehearsals on casstette. I might upload them to the myspace page.