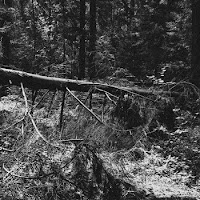 This is from their Lastfm: Void Forger is a Romanian band from Bucharest playing a mix of sludge, crust and black metal formed in 2011. Its three members are originally from Bacau, Romania, but have relocated to Bucharest for studies. There they have done a few jams with different band members, the ones from 2010 leading to the ideas approached by the current band, old school down tempo harshly distorted music with hints of speed, screamed vocals and with a dark and nihilistic sound. The lyrics are inspired by cyberpunk and dystopian themes, fantasy and social issues. In early April 2012 they released a 3-song demo, Ruined, which is free to download.
The demo delivers three lengthy songs, music wise there is a mixture of doom and sludge with some black metal and crust hints: Slow and mid-paced tempos, slow and heavy guitar riffs and bass lines, deep dark low throaty vocals and genre and beat changes keep the whole thing interesting: From mid paced crust outbreaks to the pessimistic doom/sludge parts. As conclusion, the whole demo is interesting and fans of doom/sludge/dark hardcore will like it, since it reached the 200 downloads per month (is this a proof of being a interesting demo or not?) the band uploaded in mediafire, enjoy it!