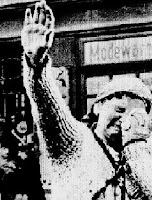 I don't know anything about Evolved as One, this tape tracks were offered by them and the mail included the following writing:"Evolved As None is a Finnish primitive grind/crust band started in 2008 in the city of Helsinki. Our challenge is to face the all problems, anger and frustration that lies under the society and human being. To express this feelings we play primitive and fast grindcore. We've released our first EP in 2011 (although it was recorded already in 2009). New material in next autumn." Well, these words describe perfectly what you get here: A sonic grinding storm in seven minutes and eight songs spitting fast old school distorted grinding noise with thrashing drums and dual shouted/yelled vocal attack. Named after a Napalm Death songs should make all a little suspicious. A couple of samples of new tracks there are in their myspace page and continue the same noisy shit.