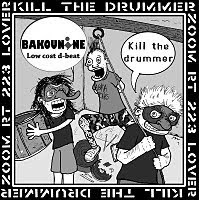 I don't know anything about Bakounine, this cd was offered by the band (thanks!) and the only information i can get is from their blog: They come from Bretagne they were formed around 2008 and recorded a demo (200 cd's and 50 tapes), this was followed by a split cd with Murder One (200 copies) and a split tape with Violent Chiasse Attack (60 copies), both in 2010. in April of 2011 they released Drum Machine Years discography cd which includes all their recorded material.
The demo brings eight tracks of crustcore and as the title of discog cd says, they use drum machine and that brings an industrual-ish feeling in their low cost(!) D-beat. In their splits they sound more brutal, faster and aggressive and the dual vocals (growls vs scream all sung by the same person) work nice. Unfortunately their blog is in French and Italian and i can't understand a single word, the singers sing in french too and i suppose lyrics deal with the usual socio-political topics. Now they seem to be a trio (they added a drummer in the band). Drum Machine Years is offered for free in their site.
Posted by 7inchcrust

The correct name of the band is bakounine (who was an Russian anarchist). Contrary to most people think there is no dual vocals really, the singer himself used to do all the growl/scream yells.
And they come from Brittany in France. Only one song is in French the rest is in Italian.