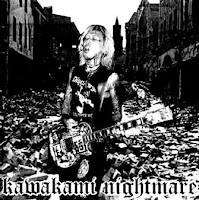 "The band Kawakami Nightmare was formed in the end of March 2010 by three guys from different cities of Ukraine and Belorussia (Eugenio - bass/voc, Antonio - guitar/voc, Mstislavio - d-beat). It was decided to use the musical component of such a bands as DISCLOSE, DISCHARGE, GLOOM, FRAMTID, DISCARD etc. The name of the band is an honour to legendary Hideki Kawakami (1971-2007) - the great d-beat master. After the first rehearsal we had playing the debute gig in Kyiv (Ukraine). In April we recorded mega-noise and ultra-distort "3 TRACK DEMO". We are don't published it anywhere, just uploaded for free downloading."
This was taken from their facebook page. (they also have a blog)The demo starts with a five min intro which delivers sound samples of war sires, war planes, falling bombs and explosions and paints nicely the usual war atmosphere of D-beat lyrical content, despite the length of five min. this is interesting and doesn't get boring shit. The other three tracks deliver Distorted Raw D-beat Punk, the sound is very very raw and distorted and makes demo sound like a rehearsal recording. For lovers of Disclose,Giftgasattack,Go Filth Go, Electric Funeral and the likes, the band offers this little piece of noise for free. Apart from this, they have recorded nine tracks for an upcoming split cd with Disgod from Indonesia on Total Punk Records (St Petersburg) which is already available for downloading on K.N. blog (grab it here, link is provided by Eugene, bassist of Kawakami Nightmare, thanx dude!)

NO BEAST SO FIERCE said...