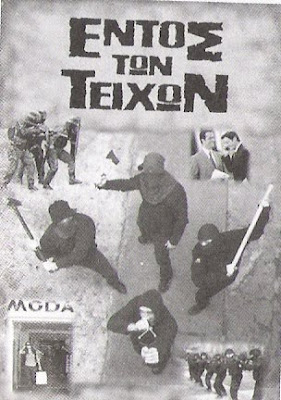 I don't know anything about Cyprus scene, actually Nuclear Mutants is the only band i know coming from Cyprus and Entos ton Teihon (Εντος των Τειχων, Within the Walls) and their self titled cd is the first chance to discover an unknown scene. Google search gives no results and wikipedia has nothing about Cypriot punk/hc/crust
I don't know anything about the band, one of band members was previously in Nuclear Mutants. The cd was recorded and self released this year, the sound quality is dissent, music wise they move in the anarchopunk / hardcore territory, they deliver twelve tracks that last for about 41 minutes bringing hardcore riffs, fast beat with some slower parts and angry male shouting vocals. Some female vocals appear here and there while some leading guitar parts work really nice, sometimes they remind me of a greek hardcore band called Ekriksi Vias (Blast of Violence). Nice effort for a debut work, the guitar delivers some interesting riffs and has crusty flavor and the band manages not to sound generic. The cd comes with an amazing 32 page zine with lyrics and translation in English (they sing in greek), texts with information about the topics and explanation of lyrics, hopefully i will scan it some day. Lyrics deal with the usual topics (education, religion, drug addiction etc).

Get it
Posted by 7inchcrust