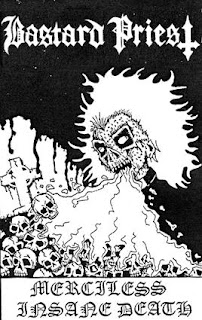 Swedish dod metal.Bastard Priest come from Sweden from the city of Stockholm.These guys, as Swede's are used to,deliver a really nice demo,that crushes you to the ground.That is mostly due to the fact that this is old school Swedish death metal,but not in a nostalgic way,rather more with a crust approach to the whole thing.Even the last track is a Bombanfall cover,so you get the idea.This is released on cassette in 2008,dont think the band has any copies left but you could track some here.All in all,if you like your crust with some 90's death metal on it,this is it.

this fucking kills. thanks for posting it!

Excellent shit! I just started this blog, but if u see any music you like, go ahead and check it out