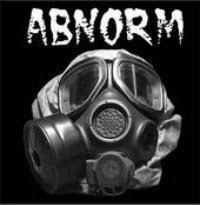 A few days ago i was thinking about posting this but i was too tired so i canceled it for sometime later, then next morning i a comment made by Bergman, the drummer of Abnorm, came in, well thats perfect timing
Abnorm hail from Boras, Sweden, they formed in winter 1999 but they recorded tracks for first time in 2005, you can see a detailed biography here, their discography is: "Multinationella Horor" (2006), "Ert Jävla System Kan Fan Brinna I Helvetet Era Satans As"(2006), Enough (2007) plus a split 7" w Rajoitus (2006) and a 3-way split w Rajoitus and Zudas Krust from Indonesia They also contributed tracks in several compilations.
Abnorm offer for free their recorded material in their website, its good enough to give it a try, on the other hand Rajoitus offer for free their releases in Last.fm. ("Historia Kusessa" [7",1996], "Nyt On Kuolema Täällä" [7,1998]"Systeemiin Naulittu" [7,2000], Discography cd,2003 and "Hat Mörker Amfetamin" [2005,lp-cd.
And finally, in another manifestation of this perfect timing, Essak the bassist of Zudas Krust, (D-beat crust from East & South Jakarta, Indonesia) made a comment in 7inchcrust putting the link of the 3 way split, give it a try too :)
Posted by 7inchcrust

Hi, thought you might be interested in this band for one of your blogs: Crow were a band from Whitstable in Kent, UK, during the early 90s, who played a hybrid of Tribal Psych/Prog/Crust/Punk. (Imagine Hawkwind/Ozrics mixed with Killing Joke). They have recently reformed after 13 years. Here are links to their two cassette demo albums:

You can read info on them at:

I hope you're interested in featuring them, my own blog is too small really, and I think more people should hear them.

hi John
thanks for this demo,sounds interesting,i will post it a.s.p.
cheers

thanks for posting this one. i'm the drummer in abnorm. also have a blog with all different kinds of music. cheers

oh sorry that i commented, didn't realise that i had given your site a comment before i wrote just now =P

aha no problem its ok
cheers :)

hey can you post this on yer blog for me? im trying to get it out as mutch as possible!
i play in this band germ attak and this my new band,No Solution. we just put out a 21-track tape.its all covers so far.its better than name dropping your influeneces hehehe..
these are the songs covered:

you listen to all the songs here: ( this link might expire)
http://rapidshare.com/files/163231825/nosolution-2008-demoMP3.zip.html
if that link doesnt work,try:
http://www.megaupload.com/?d=57F7RUGQ
or:
https://www.yousendit.com/download/Y2o4blFCbEFHa05jR0E9PQ
please spread these mp3s as much as possible. i also included a printable demo-tape cover.

http://rapidshare.com/files/163234385/schizophasia-2008-nonsense.zip.html
if that link doesnt work,try:
http://www.megaupload.com/?d=05I5X4Q6
or
http://www.yousendit.com/download/Y2o4blFERncwVW14dnc9PQ
its 4 songs of confuse meets hawkwind brutality...
let me know what you think!

Hi!
thanks for these demos, i will post both tapes as soon as possible