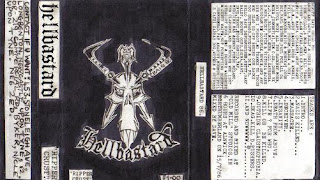 There's no much to say about these crust legends: Hellbastard recorded Ripper crust back in the summer of 1986 and it was the first time the word "crust" was used to describe a music genre. According to the tape's sleeve, the tracks were recorded in six hours at Old Mile studios at Alnwick Northumberland on 15-7-86 and the cost was 25.00 pounds. Hellbastard offer here nine tracks of their metallic crust that became the influence, along with the other uk crust legends, for many crust bands in the next decade . This demo was re-released on purple vinyl(12") by Grindcrust Records in 1993
tracklist:
1: intro
2. Nazis killed
3: Massacre
4: Deceiver
5: Insanity
6: Death from above
7: Life for who
8: Kill or be killed
9: Outside claustrophobia

Thanks for your great blogs! Will come back for more great music! Stay punk!

sweet one of my crusty friends got me into this shit; we noticed a lot of the stuff from the Canada section of your blog was distro'd by another one of our friends too. awesome demo blog dude!