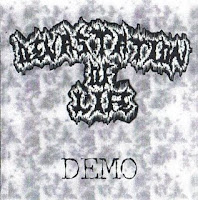 Devastation of Life is a grind/crust band from Greece including the drummer and the guitarist of Extreme Violence (a death metal band from Lamia, central Greece) and i think the bassist used to be in Nuclear Winter (not quite sure though..). This is their 2005 demo cd and there must be a tape version too. Here they offer seven tracks and 8:30" of grinding crust with brutal distorted vocals, blast beating drums and raging thick guitars. The sound production is excellent, the drummer beats the skins like maniac and the guitar has a metal feeling. The band did not include the lyrics but from the track titles and the fact that they have played in benefit/solidarity gigs is obvious that they deal with sociopolitics.
Apart from this, DoL have another demo from 2003 and in 2009 they released a 7"
Many thanks to my metalhead friend Michael who contributed this shit (Greetings dude and thanks for everything!!).
Tracklist:
1: Riot
2: Scattered thoughts
3: Direct action
4. Bomblast
5: System enslavement
6: Mockery
7: Lost ideals

hahah, no Slobo, no more crust-whatever. no free time....
one blog makes you spend so much time, two blogs is twice the time...

neither of the links are working, could you please re-upload? thanks a lot!

Here it is:
http://www.mediafire.com/download.php?wzzwvb4hploar8b
enjoy it!