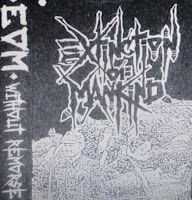 Without remorse is the demo tape of almighty Extinction of Mankind, recorded in their early days back in 1993. We all know EoM so there's no much to say about this tapw: This is a raw version of their later mid paced metallic crust, influenced by Amebix and Antisect. Ten tracks full of emotional metallic riffs, mid-paced and faster tempos and the whole stuff sounds familiar to everyone who knows EOM, especially Ste's vocals. The sound quality is raw and bearable, i have already said enough, go get it!