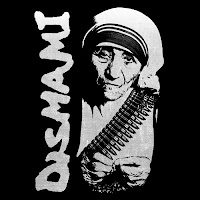 The artwork is all the money here: A grim glanced Mother Teresa wearing a bullet belt and probably a lethal weapon is hidden in her hands: I don't know anything about Dismami, there is no any site, blog, whatever that could give some information about them but these tracks uploaded on Soundcloud and this info: "2011 - 2012, We split up,thanx for everything". They were from Switzerland and these tracks were probably recorded sometime in 2011, if you know anything about them just write some lines here. The tape brings nine pieces of D-beat hardcore including a Disrupt cover, give it a listening :), oh the same picture of Mother Teresa but in black metal way was used by the Californian crusties Black Hole of Calcutta.

Their Name is swissgerman and means "Your Mother".

indeed,you don't find a lot about them on the internet, but i saw them in 2011 in the summer at schrottbar in switserland, and for me it was the best performance, i really enjoyed their music