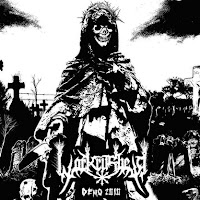 This is brutal grindcore/crust: Warkrusher is a four piece grind influenced crust act from United States and Mexico (San Diego and Tijuana) and this is their seven track demo recorded in 2011, i know that the words "brutal" and "chaotic" are very common when you have to describe such stuff but that's what you got here: Brutal chaos and over of sixteen minutes of noise. Distorted vocals, chaotic guitars, fast tempos, breaks and slower tempos, a raw sonic hell nicely delivered and balancing on the border that separates grindcore and crust and not buried under a noise wall of a million drum beats per minute. The band is going to record a new demo with all the songs re recorded and new songs as well. Dnld link is provided by the band (Thanx Miguel and cheers!)