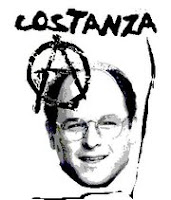 This is Costanza and not Costanzo: Here we have a now defunct band from Portland, OR, inspired and named after George Costanza (and not Franco Costanzo), yes its the guy you see on the cover. This demo tape was recorded in 2009 and brings nine tracks and less than nine minutes of ferocious and raw hardcore, honestly i didn't expect it to deliver such wrath and anger, maybe it was the funny song titles, the character of Costanza as inspiration or whatever, the truth is this tape is really good and delivers a sonic inferno, the sound is raw and samples with George Costanza's voice pop up all the time. The band never recorded any official release and unfortunately behind the funny and lighthearted attitude and band profile there is a tragedy: Two members are dead... Anyway, go and give a listening to these forgotten kids. James, thanks for the demo and i apologize for the delay, cheers!

Did that album ever get released? And where can I get the original cassette tape demo I'd love to have a copy of it.

wait did they really die ? I remember a teaser coming out of new ongs, which i was surprised.. and i thought i h ad it already in my music library but it's only the first demo.

How are they still recording if theyre dead? how did they die ?