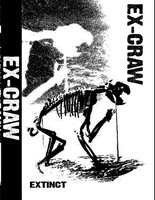 Ex Craw come from Perth West Australia and they are the band named The Craw with a slightly different name, i posted Primitive Thrash split ep with Deathgrenade so there is no need to repeat any shit about them. Extinct is a eighteen track home dubbed demo tape recorded in 2011 and released by Live Fast Die Drunk Records (myshit, site, blog) a label run by Shane (bass player in Ex Craw and also in Warthreat) who kindly offered it (thanks and cheers!). The demo lasts nearly 30 minutes and brings fast and thrashing hardcore punk similar to their stuff from the split ep, most of the tracks are new and just a few come from 2010-2009 sessions, the cover includes insert with lyrics. sound is raw and decent. Link is provided by Ex-Craw, very nice effort and i wait for more by them, thanks Shane and have a crusty new year!