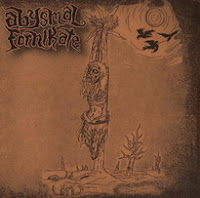 Yeah!this is the perfect blending of Fall of Effrafa with Schifosi and From Ashes Rise! Abysmal Fornikate is a five piece act (four guys and one girl), they come from Malaysia and deliver an amazing blending of Fall of Effrafa's emotional parts with the melodies of Tragedy, Remains of the Day and the likes. They formed in 2008 and sometime in the end of year/beginning of '09 they recorded two lenghty songs that last for about fifteen minutes, these tracks were released in February '09 (during the DIY femme fest gig in Malaysia) in a limited to only 50 copies demo. I can't find words to describe this, this is a hidden treasure and much better than what i expected: Acoustic and slow emotional parts are followed by faster crust outbreaks with gloomy melodies and screamed vocals, and then the band slows down the beat for another emotional part and then speeds on and on. Despite the six and eight minutes of each song the result is not boring at all: Guitar riffs and dark melodies and rhythm changes make it really interesting. The sound quality is dissent and appopriate but the band was not satisfied with it and decided not to print more copies of the demo.
Check their myspace and their blog, both tracks (re-recorded) plus four new songs will appear in their next release