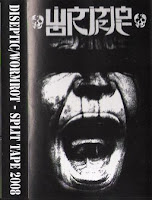 This is a split tape of Singapore grinders Wormrot and the grinding crustie Diseptic from Greece, brought to you by Noise Attack Distro:
Wormrot started as a death-grind act and after many line up changes they walked into the grindcore territory:In 2007 they recorded their nine track demo and in 2008 the "Dead" ep (selfreleased/Legion Productions & Speed Thrash Attack), the "Abuse" (Scrotum Jus Records) was released in spring of '09, that year the band toured in west/central Europe and appeared in Obscene Extreme Fest ,there are plans for some upcoming splits. Diseptic is one man grinding crust band from Greece and this must be their first release (there must be some demo recordings though).
Grindcore freaks will choose Wormrot side while the crust orientated will prefer the greek guy: Wormrot contribute ten tracks and twelve minutes of manic speed, grinding noisy guitars,distorted deep low growls/high pitched screams and nothing less than the usual gridncore paranoia.First five tracks were recorded for the tape, the rest are taken from older recordings but the quality is similar to the new stuff. Diseptic side is much more into grinding crust side of noise, the guy offers seven tracks balancing between grindcore and crust bringing tunes very close to Disrupt for approximately nine minutes. There are grindcore hints and D-beat as well,fast beat and brutal vocals,only a few slower moments, wish only there were more tracks and much variety with breaks, more slower parts etc but even what is delivered is good enough and wins my taste.The tape comes with no lyrics, according to Wormrot track list the last five tracks are taken from the '07 demo but actually are taken from "Dead" ep, sound quality is dissent for both bands and helps them deliver the brutality.
this was released by Noise Attack Distro in 2008, only 150 hand numbered copies were made, riping tapes is a pain in the ass but here is a copy for you: