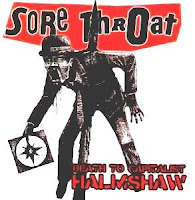 This is a killer cd including demos, rarities, rehearsals and live recordings from the old days when Sore Thoat were grinding the world with their drunk grindcore. Released by the chinese label Area Death Productions, 500 copies were made and according to the label most of them were sold to Japan, about only 40 copies were sent to USA and the rest of the world. What we got here? Hmmmm.. take a deep breath and start reading:Aural Butchery demo 1987, Noise Annoys demo 1988, Death To Capitalist Hardcore ep 1988, 30 tracks live, taken from a gig in Birmingham 1987, the Poison Idea - No Handle Beer demo 1990 (2 Poison Idea covers and the Sore Throat track Filth-Chain) and a few unreleased / rare comp tracks from 1988/89. More than 100 tracks! Comes with a sticker, postcard, and fold-out poster! The cover is similar to Death to capitalist hardcore ep and a booklet is included with infos, artworks and a full track listing. This is a official release made in collaboration with Rich Militia (Sore Throat/Isen Torr).
This is not sold out yet, so i m not gonna upload it, there are already parts of it posted on 7inchcrust, check Sore Throat's official myspace for infos in case you wanna buy it, there are some userful links there.
ps: Hammy Halmshaw is the guy behind Peaceville Records who had played once for Sore Throat
Sore Throat-Death to capitalist hardcore 7"
Sore Throat-Abraham ear 7" 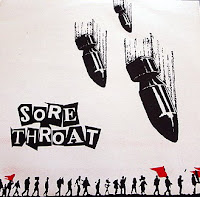 And just because there is not new download stuff for this post, here's for your listening pleasure the F.O.A.D. bootleg lp, limited to 240 copies, side a is the Rich Militia's post-Sore Throat band Sludgelord Demo (this was released on vynil in 1989) while side B is live recorded from 1990. About 37 minutes of grinding noise, some tracks of Sludgelord demo are intrumentals. I'm not quite sure about the year this shit was put out so if you know it or if you know any info about make a comment...Many thanks to Hzp for contributing this
Tracklist:
A
1. My dick bleeds for you
2. Sick of your fucking attitude
3. Rillington Place sunrise
4. Blade fucking barrier
5. No one gets out alive
6. Blue mice in the sky
B:
1. Intro
2. March against the nazi's
3. Fuck the poll tax
4. Kill your idols
5. Hang Norman Tebbit
6. Bio hazard
7. Rock'n'roll colostomy
8. War system
9. Against authority
10. Blue mice in the sky
11. War is horrendous

the zshare page for the F.O.A.D lp is being an asshole, could you please check that it works and if not reup it?? would be very grateful..

yes can you re up this please
thanks
ray ss